‘I left SIMI in 1985, before my son Umar Khalid was born, and when there was not a single case against any individual in SIMI or the organisation,’ Umar’s father SQR Ilyas speaking to the media.

Of the JNU students who organised the February 9 event leading to Kanhaiya Kumar’s arrest, one is the son of a politician who used to be in the SIMI before he left three decades earlier, long before the outfit was banned. As the police look for the son, the father asks if it is because of his past that his son is being “branded a traitor”.

“I left SIMI in 1985, before my son Umar Khalid was born, and when there was not a single case against any individual in SIMI or the organisation. SIMI was banned in 2001,” Syed Qasim Rasool Ilyas told The Indian Express.

Ilyas is now the national president of Welfare Party of India, which operates out of Abul Fazl Enclave in southeast Delhi.

“If you are branding my communist son a traitor because of my past, and holding him to trial in TV studios, it is worse than targeting… He is being punished in media studios for having a Muslim name,” Ilyas said. “None less than the home minister of this country has attributed this branding to Umar..all because of his name. Can there be any bigger branding of him?” Ilyas questions.

Umar ran into frequent arguments with his family about what he called “ritualistic” practices of Islam. “He hated going by the book… He was questioning everything which led to frequent arguments, even my differences with him. Whether it was praying, fasting, or women in the family covering their heads, he was the only non-believer in our family which angered me, but he is a young man,” Ilyas said.

Family friends describe Umar as a “pakka communist”, a “leftist”, “an atheist”, whose every social media post began with “Comrades”. One of the sisters recently put up a social media post of how he rebuked her when she asked him to take Calcium tablets after his tooth fell off recently, saying “people in the country did not get enough to eat.”

Although Umar Khalid has not been named as an accused, police are looking for him as one of the organisers of the “anti-national” event. Ilyas said he last spoke to his son after a TV interview last week and that Umar told him he was going to JNU.

Asked why he thought his son was being “branded”, Ilyas said, “There were ten organisers in that event. If you look at the posters, Umar’s name was in seventh place. Yet he has become the main conspirator and the most dire threat to the nation, if you believe the media today. My family was scared that I am giving interviews… they are worried that after him I will be branded next. But we have to speak.”

The family lives in an apartment in a bylane of crowded Jamia Nagar. Umar went to Banyan Tree School in south Delhi, graduated from Kirori Mal College in history in 2009, and then did his MA, M Phil from JNU. He is now pursuing his PhD on the condition of tribals in Jharkhand.

Ilyas is a PhD in Chemistry. One of Umar’s sisters is a teaching assistant in Massachusetts University in comparative literature, another sister studied in St Stephen’s College. The youngest sister is 11.

Ilyas said a Yale University professor whom Umar had corresponded with during his PhD had last year offered him a semester there, impressed with his research. He said the sister in the US, in particular, was keen that Umar go to Yale, but he refused.

“All of our family have passports, even my youngest daughter. But Umar never got a passport, he has never sat in an aircraft. Today they say he went to Pakistan and had links with JEM and Hafiz Saeed,” Ilyas said.

Ilyas said all the “regular stereotypes” have been associated with his son. “Ask anyone who knows him how much of a believer he is,” Ilyas said. “All his time was spent in Jantar Mantar, whether it was over Rohith Vemula, Occupy UGC, tribals or Dalits. He fought with me saying my views on Islam and otherwise were based on philosophy, that I never went out among the people enough.” 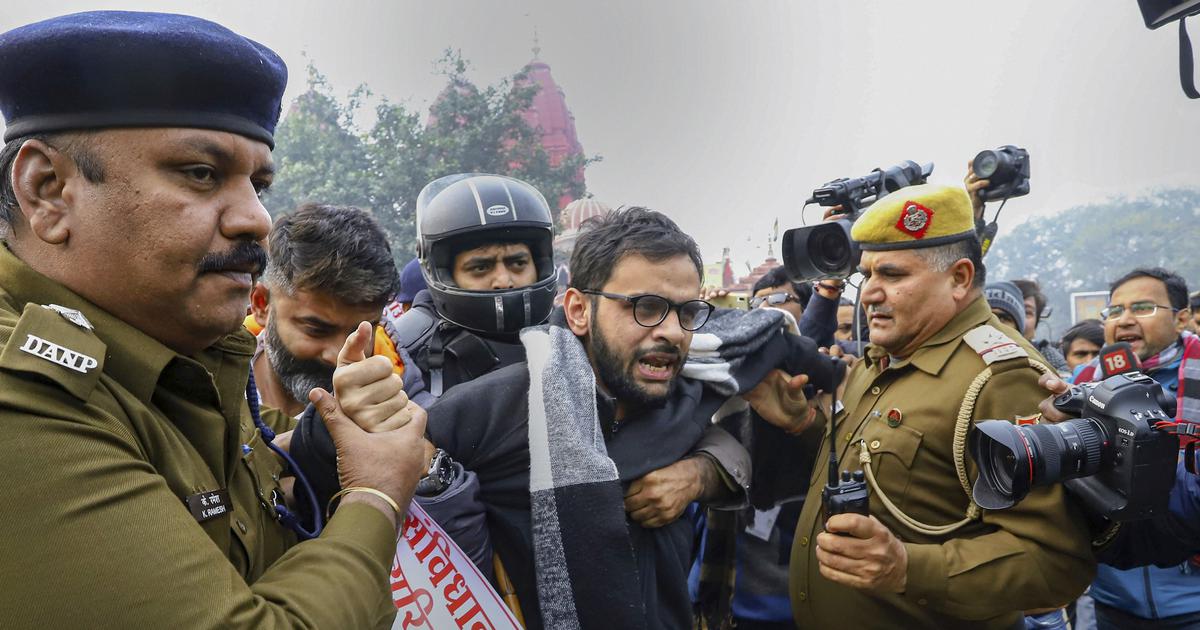 Ilyas said he had frequent arguments with his son over his “abject denouncement of the family’s religious beliefs”. Today, he said, his entire family was being branded “as a result of a media trial”. “It has been hard, worrying about Umar and going through this. We are educated people who have engaged in social work through our lives as much as we could. We never went after corporate jobs. My ideologies may be different from my son’s but I never did that and neither did he. And look where we are now, what is being said of us,” Ilyas said.

Asked if he felt the student and teaching community of JNU supported Umar through their movement, Ilyas said he felt satisfied only after Thursday’s massive student protest where “slogans were also raised for my son”.
“There were deliberate efforts from some Left parties who were eager to show Kanhaiya was not involved and tried to establish blame somewhere. My view is all children should be treated equally. It is the duty of the university administration to ensure this,” he said.

He said he heard Thursday that the “entire student community came together”. One of Umar’s sisters posted on Facebook ahead of the protest: “I am with Kanhaiya. Are you with Umar?”

Asked if he stood by his son’s purported views on Kashmir, Ilyas said he rejected the slogans “played out on TV channels”. “I am not saying Umar has not done any wrong. Who am I to say that? All I am saying is that there should be an investigation and let the courts decide. Justice should not be delivered in TV studios,” he said.

Asked why his son was not turning up before the police, he said he would like him to do so. “I don’t know where he is. I am worried as a father. Our whole family is worried for him, I want him to go through the legal system,” he said.

Yet he worried. “Even if the courts of this country pronounce my son innocent, will he ever be able to have a normal future? His face is being played out across channels with words like mastermind and traitor… His siblings are getting vitriolic messages on social media,” Ilyas said.

“I worry about his future.”

This was originally published by The Indian Express

It is high time to put an end to criminalization of Politics in West Bengal West Bengal minister and his supporters were severely injured after crude bomb was hurled at them by unidentified miscreant. The incident raises question over the law and order and security system in the state and…